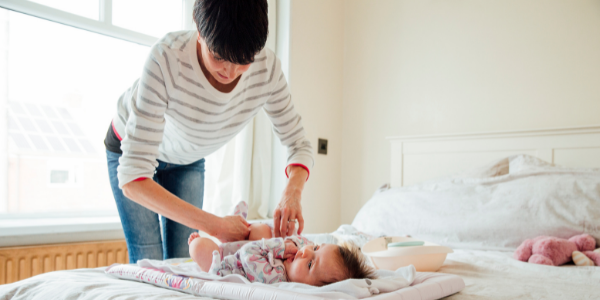 It's safe to say that most parents worry about their children causing damage when visiting other homes.

After all, no one wants to upset their friends and family, and risk never being invited over again! Thankfully, most people are pretty reasonable when it comes to kids and mishaps - kids will be kids. However, it's not unreasonable to ask for damage to be repaired or paid for, right?

This is a surprisingly divisive topic amongst parents. A few would argue that, if you're the invitee, you're taking the risk of things getting damaged by doing so and should be prepared to write this off. On the other hand many other parents are steadfast in believing that if their child breaks it, it's common courtesy to at least offer to rectify or replace.

A mum took to Reddit to ask... is she the asshole for arguing that she shouldn't have to replace a £35 rug that her 4 month old baby urinated on during a nappy change?

What was the general consensus in the responses?

Well, the majority of readers voted the poster the asshole in this situation - it seems that the 'invitee takes responsibility' stance is definitely not a majority opinion! A few people did point out that the baby's accident wasn't what damaged the rug... the friend's mishap with Vanish against the care instructions of the rug is, so the friend should take responsibility. However, some responses in turn pointed out that if the rug hadn't been urinated on in the first place, avoided by using a wipe-down surface for a nappy change, there would have been no NEED for the owner of the rug to have to deep clean it.

One of the top comments summed up the general response to the question...

"YTA.You sound entitled. Yes it was an accident, but your child caused damage, and yes you need to be responsible and replace it. Letting yuck bodily fluids ruin a carpet and not replacing it makes you an AH.

If you "accidentally hit someone with your car" are you responsible for thier medical costs? Yes.

This is no different. The fact that it was an accident and unintentional doesn't void your responsibility. You say it was "hardly your fault", yet how would you feel if someone else came over to your home, damaged property that wasn't your fault at all, and then refused to replace it?!

This is a tricky one with lots of angles to look at it from. No one wants to fall out with their friends, but it is a matter of principle, and we don't think that the rug owner is unreasonable in asking for the rug to be replaced. Urine can be a tricky one to ever get out of a rug or carpet!

On the other hand, if the owner proceeded to go in and clean the rug without proper considering the best way to do it, or without asking the mum of the baby to attempt to clean it first, then a little responsibility can be assigned to both parties here. If the rug is just 'less fluffy' rather than irretrievably destroyed, then is the friend perhaps slightly unreasonable too? Good questions to consider!

Mum, take your mate to IKEA for a new rug, and then go out for a drink to forget all about it. It's not worth losing friends over! Also, invest in a small roll-up changing mat for future nappy changes out and about.