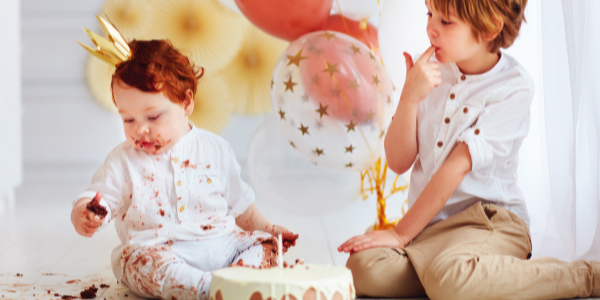 Keeping a pregnancy quiet is at the prerogative of the expectant parents, without doubt.

Many expectant parents keep their baby news on the down-low, even from their own close family and friends, due to previous pregnancy losses. Perfectly understandable, right? One mum took to Reddit to ask if she's the 'asshole' in a situation that is deeply emotional and conflicted.

After announcing the surprise birth of her daughter, whilst her own family were understanding and elated, her husband's family were 'not happy', especially as they'd missed out on a gender reveal and baby shower. Not everyone finds these events important or even a 'rite of passage', but mum was branded 'selfish' and accused of 'robbing the family of the joys of the pregnancy'.

One year later, her mother in law is terminally ill, and her dying wish is that her granddaughter is thrown a huge 1st birthday party in lieu of the foregone gender reveal and baby shower... but mum is refusing to fulfil this. Read her post below... 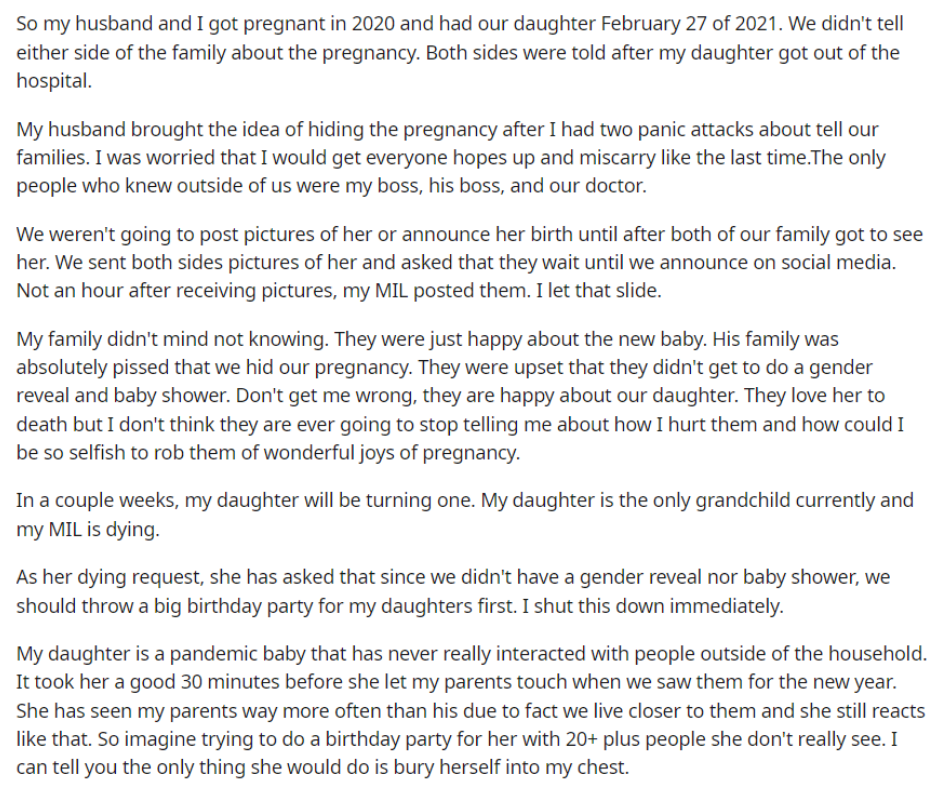 What was the general verdict?

The majority of comments voted the poster the 'asshole' in this situation, but many also conceded with 'ESH' - meaning 'everyone sucks here'. The general consensus was that mum was being harsh, given her mother in law's terminal prognosis, but that it's also understandable that mum is reluctant due to her little one being a 'pandemic baby' and not being used to many people. Is it fair to put her through it? It's a really tough call! The top voted comment was...

"I’m very split on this.

I don’t think you’re in the wrong for keeping your pregnancy to yourself.

I don’t even necessarily believe you’re in the wrong for being overwhelmed by the party because you’ll be the one actually handling things.

Family is rough, especially when it’s your partners family, but sometimes you just need to do it. Pick your battles. I don’t think this is a battle that’s worth picking.

But ultimately it’s your decision and what’s best for you. Good luck!

Edit: I would rate this ESH

Grandma for putting this sort of pressure on a new mom for being unwilling to compromise regarding a dying wish Dad, well, he just sounds complicit (but also stuck in a terrible position so he doesn’t fully suck)

Softly and kindly OP needs professional help because the amount of anxiety she’s projecting is a lot and that’s not healthy for mom or baby. With that level of attachment issues from both mom and kid, maybe postpartum. I’m no doctor but I strongly encourage OP to see someone about this.

However, I’m also very concerned with how Dad will feel if his mother passes and he didn’t give her her dying wish, when he could have. That’s a heavy burden to bare if he doesn’t properly handle his feelings.

Health and safety do come first, especially in COVID times, but we now have the tools to mitigate that with things like vaccines and zoom."

Our verdict is that this is just a horrible situation for everyone. We'd be frustrated if our in-laws reacted badly to a pregnancy being kept quiet due to a miscarriage in the past - it's a perfectly reasonable thing to do - and we can completely empathise with mum being worried that her little one would be upset by a large party gathering. However, she doesn't seem willing to compromise or come to some sort of arrangement here either - should she feel obliged to? Tough question. Our moral compass definitely makes us feel for the dying grandmother, but perhaps we'd disagree that mum is 'fully' the asshole here.