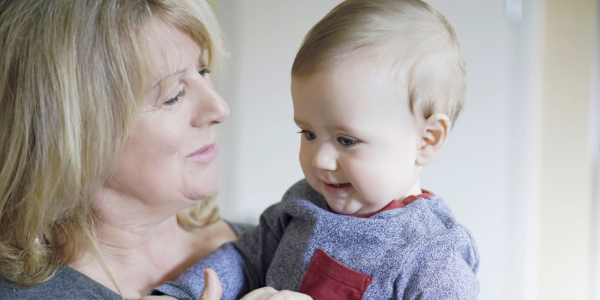 Making the decision to not allow unsupervised access to your baby must be a tough one.

We can't imagine how conflicting it must feel to be put in the position whereby you can't trust a loved one with your baby! However, those who made this decision fundementally tend to have very, very good reasoning for it. It's not a decision to take lightly, as beyond the emotional upset and potential chaos that could ensue, there's the practical side to consider. What if you need help with childcare in an emergency and they're the only option, but of course, you can't fully trust them?!

One new mum took to Reddit to ask, is she the asshole for not allowing her MIL (mother-in-law) access to her baby without supervision? 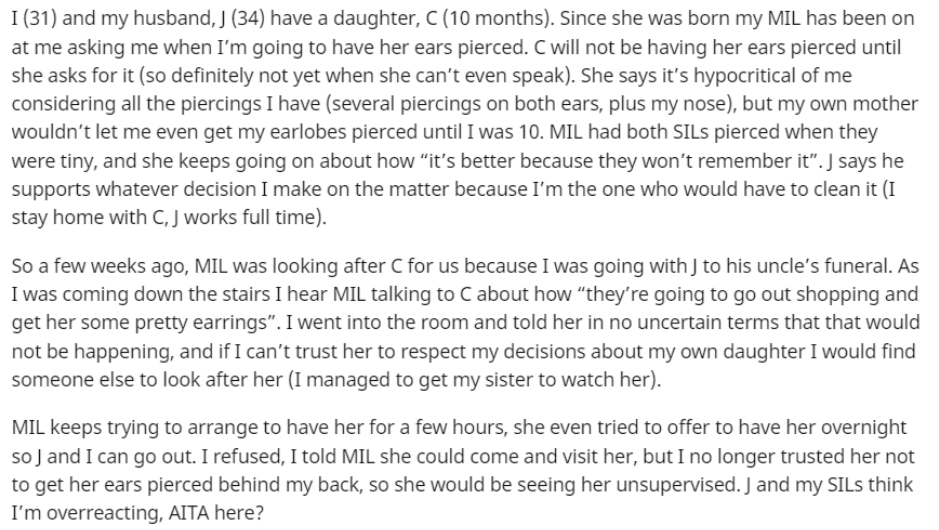 Overall, the majority of readers voted that the poster is 'NTA' - not the asshole. The comments section was very much in support of the poster - the initial comment about ear piercing might not have been as bad after a firm discussion, if the MIL hadn't then continued to pressure the new mum and continually drop comments that made the mum suspect that there was potential for some underhanded tactics.

Some comments pointed out that piercing ears of babies is a cultural thing, with the poster responding that the MIL isn't from a background where this is a cultural norm. Others advised the poster to contact the police, but the poster doesn't plan to do this, especially as her MIL technically hasn't followed through. The top comment was...

"I had a client (divorce) whom also pressed charges and sued for the same thing. But the plot thickens; the place that did it also ended up suing the MIL for damages, as she fraudulently signed consent as the baby’s PARENT/LEGAL GUARDIAN, when she clearly was not…..double whammy. When they divorced, it was court ordered that any and all time the MIL was around the child had to be supervised. Fuck around and find out, as they say.

NTA, OP. Your mama bear instincts are kicking in for a reason. Mothers intuition is a powerful thing; listen to it, and keep protecting your child from an MIL whom will have her ears pierced the moment you give an opportunity."

It goes without saying that we wouldn't trust this pushy grandmother, either. We could have let the initial conversation slide, if she'd let the matter rest after being told 'no', but given the persistent comments and underhanded nature of this MIL, we think that the 'no unsupervised access' rule is justified. In fact, a number of comments on the post regaled stories where their own relatives have done the SAME thing without their permission - shocking! Mum is NTA (not the asshole) for trusting her parenting instinct and not trusting her MIL.