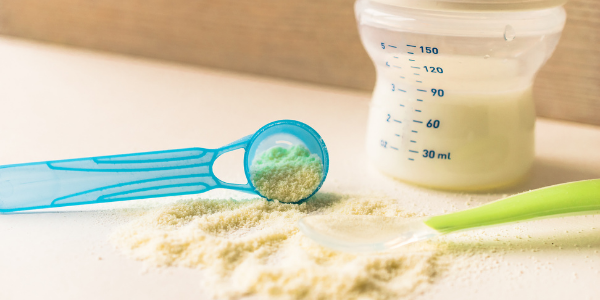 Should Formula Ever Be Frozen?

The direct answer to this question is no, formula should never be frozen.

But why? Breastmilk lollies are all the rage and an excellent teething remedy, so it’s natural that formula feeding mummies want to get in on the fun. It seems like a fabulous idea to freeze formula into lollies, but in actual fact, there are a few reasons why it isn’t a good idea. We’ll look into these reasons here…

Reason one: it isn’t tested for this purpose.

During the manufacturing process, formula undergoes rigorous testing to ensure mummies and daddies can safely use the product. What it is NOT safety tested for, however, is freezing.

Aptamil has answered this question on the FAQ section of their website; this guidance applies to ready made formula and powdered formula.

Because no one has tested formula milk for the purpose of freezing, no one is able to ascertain if it’s safe. Formula isn’t sterile, unlike breastmilk, and can harbour some nasty bugs that are usually killed off by safe bottle preparation as per the instructions. Some mummies have made formula lollies using formula prepared with cold water, which is unsafe as formula needs to come into contact with water that’s around 70 degrees celcius to kill the bacteria without ruining the nutrients. It could be safer if done with formula that is correctly made, cooled and then frozen, but no one can safely tell parents that ‘yes, this is safe’, so it should be avoided.

Reason three: the milk could separate, unlike cows milk and breastmilk.

Freezing changes the composition of formula milk, meaning that it is likely to separate. When this happens, the taste changes too. Some mummies in our community have experimented with this out of pure curiosity and have told us that it doesn’t taste very nice. You are honestly better off waiting for the 6 month mark, where baby can safely be introduced to solids and cows milk as an ingredient, and making your own lollies out of yoghurts, milk, or fruit.

This is not too much of an issue if it’s a cool treat for the gums or hot weather and not replacing a feed, but if it’s being given as a snack or counted towards milk intake, it could be problematic. Of course, this point isn’t relevant after taking the previous three points into consideration!

‘But people freeze breastmilk and it’s fine to use!’ is a common rebuttal we’ve seen; the NHS website agrees that freezing breastmilk may denature some of the nutrients but the feed will still contain more nutrients than formula when it is defrosted, so it isn’t a concern.

We hope that this helpful to all you mummies and daddies! We appreciate that there will be some of you who’ve done this and not experienced any issues, but this still doesn’t mean that it’s advisable.